The tower is 22 feet 6 inches square, with walls about 5 feet in thickness. It is awkwardly placed in connection with the church, the walls not being parallel to those of the nave, while the tower projects into the south aisle from 6 feet at one side, to 7 feet 6 inches at the other.

The tower is six storeys in height.  The lower four of these storeys form part of the original structure, and have small narrow apertures, except the fourth storey, which was probably the original top storey or belfry, and has a two-light window on each side (again Romanesque with rounded arched heads).  The four lower storeys of the tower are all built with red freestone, the fifth storey is of yellow freestone, the sixth or top storey of a grey freestone, and the tower is finished with a parapet of red freestone.   The two highest storeys are of a later date - on the parapet are the arms of Bishop Chisholm of about 1500.  The top storey contains a large pointed window on each side with a central mullion.

The ground floor has a pointed ribbed barrel vault, and a wheel stair in the south-west corner. 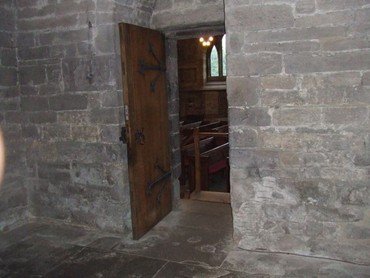 The doorway of the tower is in the north wall, and now enters from the south aisle of the nave though is thought to have been originally an external door - the sill is about 3 feet above the existing level of the floor of the nave.  The doorway is Romanesque is style (Norman, semicircular arch head).  The tower may have been intended to serve as a place of defence against attack, as well as a belfry.

The tower houses nine change-ringing bells.  The largest is E-flat and weighs 24 hundred-weight.  The clock chimes the Alleluia quarters.