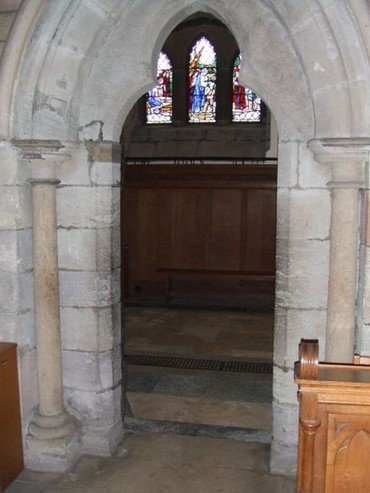 The oldest part of the Cathedral after the tower is the north aisle of the Choir (generally called the Lady Chapel or Chapter House).

The work here is of early pointed style.  Each of the windows consist of two or three small pointed lights enclosed with one larger arch.  The ceiling is vaulted and the bosses are carved with foliage.  Above the ground floor is another upper storey with small two-light windows.  It is possible the Chapter House was the first part of the Cathedral to be erected in order to be used as a temporary church while the rest of the Cathedral was being built.

The floor of this chamber is of Purbeck marble and of two varieties of Ancaster stone, and was laid down in 1934, a gift from the Society of Friends of the Cathedral.  The Society also had the walls panelled in oak to the design of Reginald Fairlie of Edinburgh.

The windows from East to West are (click on photo to enlarge): 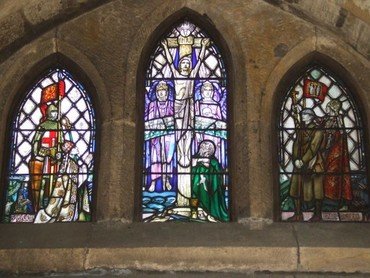 The Memorial Windows of the 1914-18 War by Douglas Strachan.  The central light shows our Lord on the cross; it emphasises the victory of the Saviour.  At the foot of the cross kneels St Andrew.  The light on the left shows St Blane and a medieval Crusader.  The light on the right bears the figure of Bishop Maurice who, when Precentor of the Cathedral, prayed with the Scottish troops before Bannockburn, and a soldier of the First Great war, carrying a pennon with the arms of Dunblane. 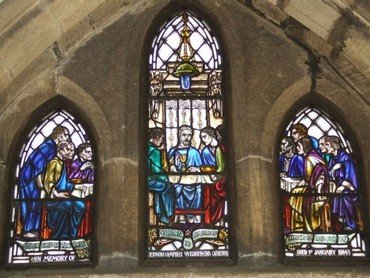 The Lord's Supper window by Douglas Strachan, presented in memory of Dermont Campbell who died in 1914. 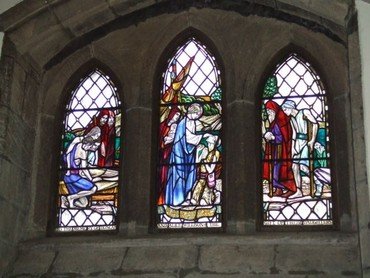 The Healing of the Sick window by Douglas Strachan, presented in memory of Mr and Mrs Duncan Willison. 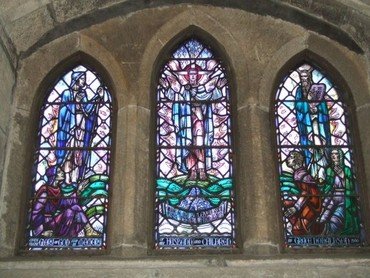 The Transfiguration window by Gordon Webster, presented by Mrs Donaldson in memory of her family. 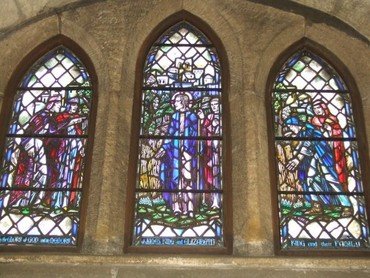 Jesus justifying the plucking of the corn on the Sabbath by Gordon Webster, given as a legacy by Helen King in memory of her family. 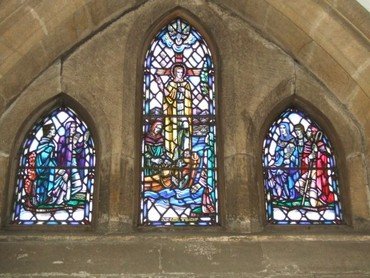 The preaching from the boat by Gordon Webster, in memory of Provost James Barty.

Associated with the War Memorial Windows are the following (click photo to enlarge):

The panels of home oak on three sides.  On six panels, below carved and illuminated crosses, are the names of the sixty-one men and one woman of the congregation who died on service.  In the centre of the north and of the south panelling stand the Rolls of Honour, painted by Helen A Lamb and gifted by her.  These contain the names of all of our congregation who served, and those who died are marked by a golden cross. 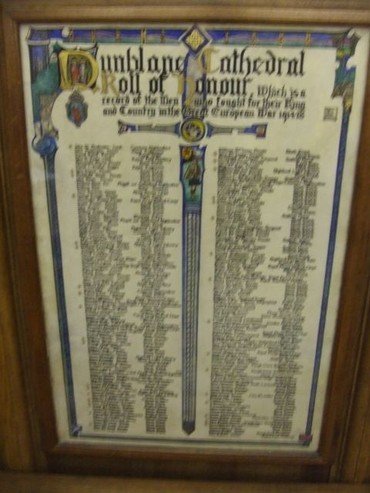 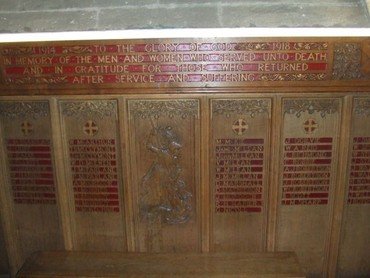 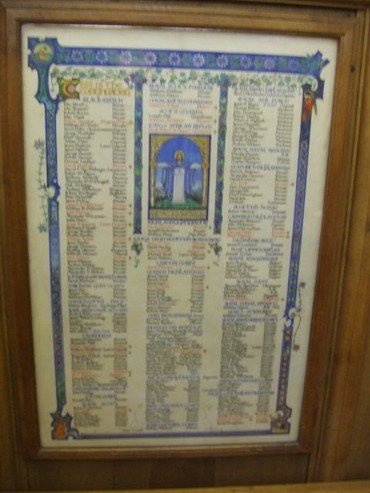 The Memorial of the 1939-45 war is on the south wall of the Chapter House, an illuminated scroll that is another fine example of the art of Helen A Lamb.

In the passage leading from the Chapter House into the North Aisle of the Nave is the Garden of Gethsemane window - the gift of Mrs Thomas Henderson of Argaty and the work of Dr Douglas Strachan, the smallest window he had ever designed and made.  The scene is the Garden of Gethsemane.  Our Lord is robed in a blue mantle hanging from the shoulder and

wrapped around His body.  Jesus kneels on a grassy bank above a border of spring flowers, the forearms and hands raised in supplication.  The face, uplifted and illuminated by rays of light issuing from a heavy cloud in a troubled and darkened sky, portrays a countenance of sublime resignation and obedience.