At the south west corner of the South Aisle a small chapel is located.  It is named the Clement Chapel after Bishop Clement and was restored  in 1964 under the supervision of architect Edith Burnet Hughes.

The carved figure of Christ in Majesty is by Maxwell Allan. In the passageway is a small stained glass window depicting Clement, designed and gifted by Gordon Webster in 1964.  Bishop Clement, the builder of the Cathedral, is depicted clad in a blue chasuble and stole and wearing a mitre, against a red background and in the lower right hand corner the etoile of six rays of his episcopal seal. 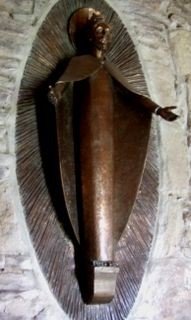 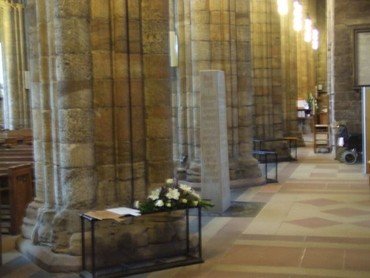 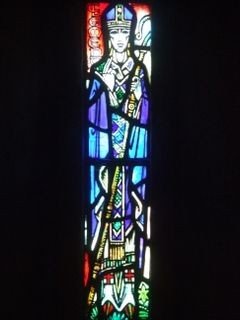 A book of prayers is housed there, the work of Helen A. Lamb. 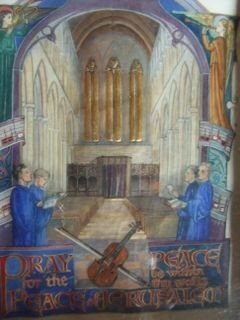 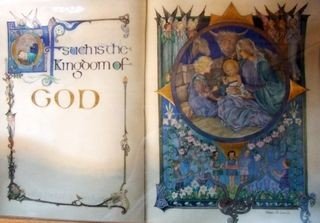 In front of the entrance to the Clement Chapel stands a Baptismal font designed by Sir Rowand Anderson, gifted by Mrs Wallace of Glassingall who funded the restoration of the Cathedral in 1889. 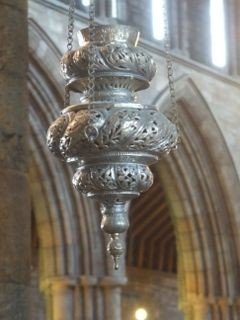 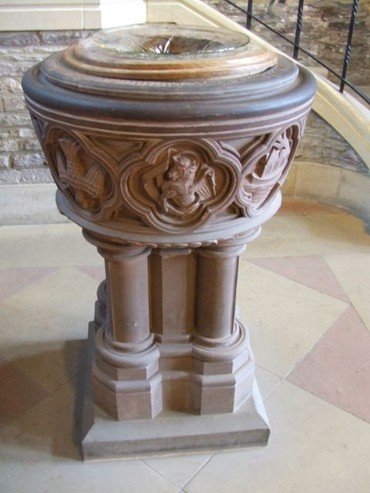 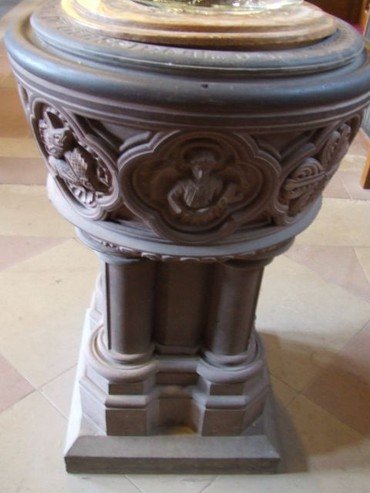 The Baptismal Window  near the font is by Douglas Strachan of Edinburgh, dedicated in 1926 and the gift of Mr and Mrs J D Nimmo of Dunblane, and shows the Baptism of Christ by John the Baptist in the waters of Jordan.

Although the whole scene is a unity, the artist has contrived to establish a difference between the middle lights and the two side lights, expressing in colour and treatment the inner significance for our Lord of this solemn act of consecration.  In the second light from the right, our Lord is seen standing in the moment of being baptised by John.  On our Lord's face is a serious resolve of self-dedication, through which one can see shining the peace of God which brooded in his Heart. John stands beside Him clothed as the Scriptures describes him - a man of rugged appearnce and character.  In order to mark out the baptism of our Lord as not simply a spectacle for a gazing multitude but an act that had its place in the purpose of God, the artist has introduced in the third light two angels as witnesses of the fulfilment of the Divine plan.  In St Luke's Gospel (iii:10-14) we are told that the people and tax-gatherers and soldiers were spectators of John's baptismal services, and asked him questions as to what they should do.  And, although we do not read of them as present on the occasion when our Lord asked John to baptise Him, the artist has introduced them into the widow.  In the first light (from the right) there is a Roman soldier and also a family group' in which the beautiful face of a mother may arrest attention; in the fourth light there stands a tax-gatherer richly clothed, and beside him a workman kneels while his son pers over his shoulder.

The Cradle Roll hangs on the west wall beside the Font.  It was commissioned by the Church of Scotland for reproduction, and the artist, Helen A. Lamb of Dunblane, presented the original to the congregation of Dunblane Cathedral, of which she was a member. 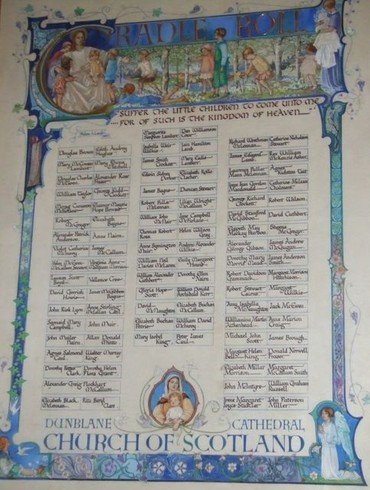 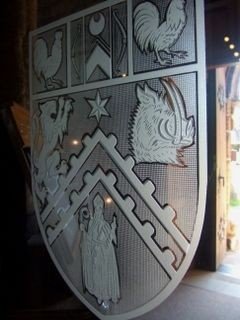 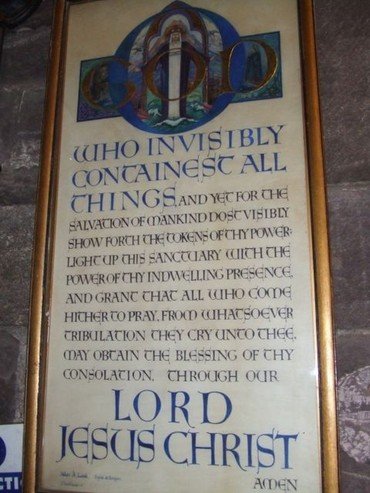 Much of her work can be seen in the Cathedral - the glass screen inside the main south door in the South Aisle is a memorial to Helen A Lamb.

Above the South-West doorway in the South Aisle is a two-lighted window in memory of Colonel J Boyd Wilson.  The figures represent St George and Hope, and the artist was Louis Davis, London.

Between the tower and the south-west doorway are the Barty windows, erected in 1917 by the family of Dr and Mrs J W Barty in their memory.  The artist was Louis Davis of London.  The subject of these two windows is the "Nunc Dimittis", or Song of Simeon (St Luke ii: 29-32).

The eastmost window, containing in the left and right hand light, respectively, the "Passage of the Rd Sea" and the "Chariot of Fire", suggests departure.  In the Passage of the Red Sea is introduced Michael the Archangel - Captain of the Hosts of Israel - in the Pillar of Fire, whilst the Starry Host is shown above the cloud.  The two central lights of the window are called by the artist "De Profundis" (From the Depths) and "Sursom Corda" (Lift Up Your Hearts) respectively.  Underneath both is represented a stormy sea, emblematical of life's chequered course.   The second or westmost window suggests Arrival.  The right and left hand lights depict the Virgin Mother and Simeon.   The large tapers behind these figures recall the feast of the Purification, or Candlemas.  At the base of the central portion of this window is seen a boat coming into the haven.  Above the haven to which the boat is sailing is introduced, in the right of the two central lights, the meeting of Mother and Child, in Heaven with roses falling earthward from Paradise.  In the left, three angels are shown holding out a crown and standing on a cloud, with roses falling from it.  A vessel from which gushes the Water of Life is seen beside them. 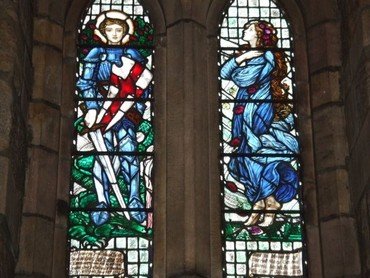 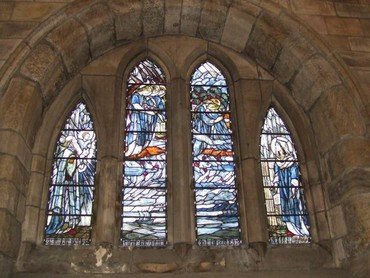 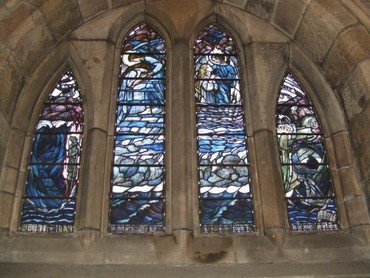 Below the Barty windows in the South Aisle stands a stone commemorating the events of 13 March 1996 when so many people, mostly young children, were killed in a tragic incident at Dunblane Primary School.

The sculptor was Richard Kindersley of London and the memorial is fashioned from Clashash sandstone quarried on the coast near Elgin and laid on base slabs of Caithness flagstones from Thurso.  All four sides of the stone are covered with deeply carved letters - the literary extracts of which are from several sources: He called a little child to Him, set it down in their midst and said, "Hear the truth.  Unless your hearts are changed and you become like little children, you will not enter the Kingdom of Heaven at all." - from Matthew ch18, v3 in The Four Gospe

ls translated by E V Rieu, 1952.  1996 Tragedy Memorial (facing south)"If there is anything that will endure the eye of God, because it is pure, it is the spirit of a little child." - from The Children's Prayer by R H Stoddard (1825-1903).  "But still I dream that somewhere there must be the spirit of a child that waits for me." - from The Poet's Journal Third Evening by Bayard Taylor (1825-78).  "We are linked as children in a circle dancing." by W H Auden (1907-73).  The texts give the stone a voice and, although they speak of children, have a lesson for adults - it is the recognition of truth and innocence so near the surface of children that strikes a chord in adults of something partly lost or covered over in adult lives.  It was the shocking and violent intrusion of the adult world into the children of Dunblane that numbed society. This stone, with its inscriptions, is placed to heal that man-made chasm and to remind us of the love of God, so evident in the joy of children. 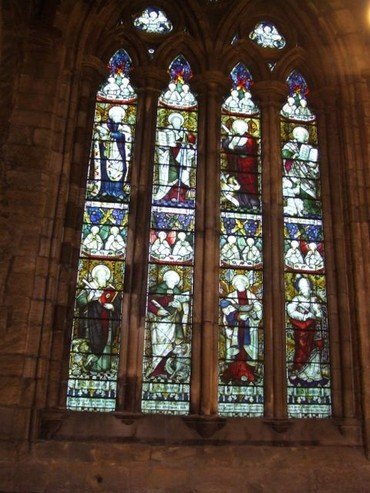 In the south east corner of the south aisle there is a large window in memory of Mr and Mrs David Wallace of Glassingall, placed here by their daughters, and the figures represented are:  St Peter, St John, St Matthew, St Mark, St Luke, St Jude, St James, the Apostles whose writings are enshrined in the New Testament.

The small window in the south east corner of the South Aisle was erected in memory of Rev Dr Henry M Hamilton who died in 1903.  The figures are John the Baptist and the Good Shepherd.

A tomb recess in the south east corner of the South Aisle contains an effigy believed to be that of Bishop Michael Ochiltree who officiated at the coronation of James II at Holyrood in 1437. 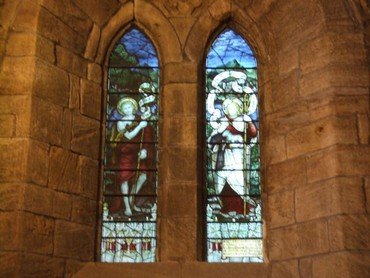 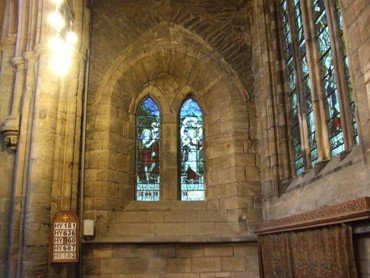 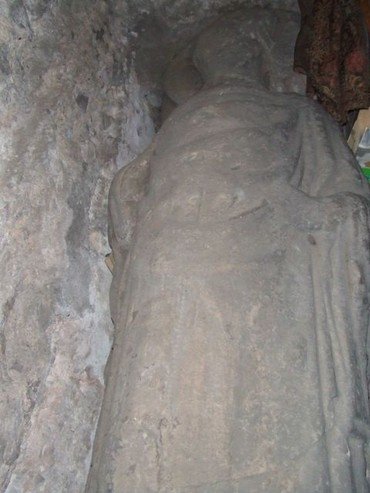