Standing at the west end of the North Aisle is a large, carved Celtic Cross which perhaps dates from the 9th century.  On the rear of the stone are several other allegorical figures, including two animals sitting on their haunches with their legs intertwined and a horse and rider with an animal, perhaps a wolf, below the horse.

On the north wall in the north west corner of the North Aisle stands a roll of the bishops and ministers who have served in this place from St Blane's time to the present.

In the middle of the North Aisle there can be seen the effigies of Malise, 5th Earl of Strathearn, and his Countess (the effigies once covered a lead coffin, dated 1271, the date of his death). 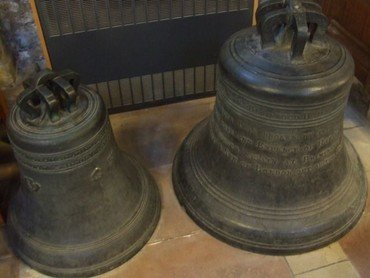 Next to the effigies stand two bells, now disused. They bear the following inscriptions: The larger - "I was founded in Edinburgh, 1612, by the care of William Blaikwood, Bailie of Dunblane, and stayed still so in my exercise till 1657, when I was broken by the unskilful direction and handling of some men, and by the care and expense of Harie Blaikwood, Bailie of Dunblane, the son of William, I am founded again at Brimin by M. Clavdigage, Anno 1660.  Recast 1809 by T. Mears & son of London, out of the funds of the Kirk Session of Dunblane." The smaller - "Founded by Lieutenant-General Drummond in the year 1687, and refounded by the Kirk Session of Dunblane in the year 1723.  Robertus Maxwell Fecit Edinburgh."

The North Aisle is also known as the Keir Aisle, various tablets and plaques on the wall commemorating the Stirlings of Keir and the Stirlings of Garden, one of which family was James Stirling (1692-1770) the mathematician, known as "the Venetian."

The large stained glass window in the north east corner of the North Aisle was designed and made by Gordon Webster and given in 1968 by Elisabeth Tenison in memory of her parents and her husband.  Its theme is the Compassion of Christ. The four central lights, each divided into three sections, illustrate a separate aspect of our Lord's compassion. The light to the left portrays Christ's compassion to the individual and shows, from the bottom, Mary Magdalene, Peter, and the two blind men. The light next to it shows compassion in general, with Christ the Good Shepherd at the bottom, the weeping over Jerusalem next and, at the top, the feeding of the five thousand.  Our Lord's compassion through his parables is illustrated in the easternmost light, showing, from the bottom, the thristy being given drink, the return of the prodigal son and the good Samaritan. Next to it is illustrated compassion through the Cross, beginning at the bottom with Gethsemane, and in the centre Christ carrying the Cross, culminating with Christ crucified at the top. 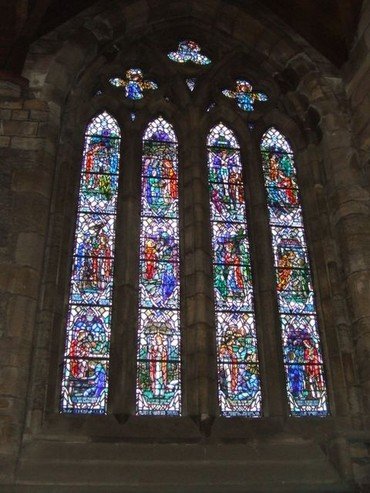 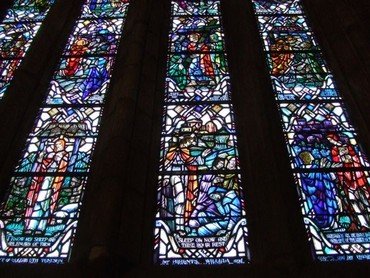