The Nave was built during the bishopric of Clement though probably not completed before he died in 1258.  A medieval Cathedral's primary function was to be the setting for an unceasing round of daily services said or sung by a team of clergy, called the Chapter.   The laity did not participate in these services which took place in the Choir.   Although the building itself has a large arch connecting the Choir with the Nave, a screen cut off the laity from the Choir and permitted only the most limited view of the high altar.  The nave was the setting for lay worship and devotion and in it would be found therefore a pulpit, a baptismal font and, along the northern and southern aisles of the nave, a series of altars dedicated to various saints. 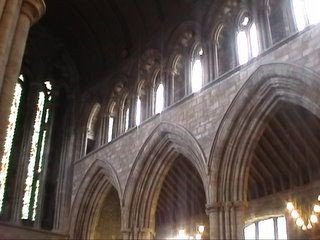 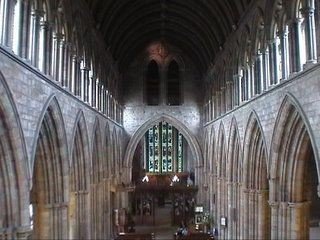 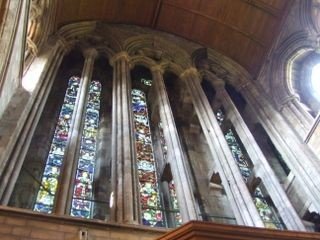 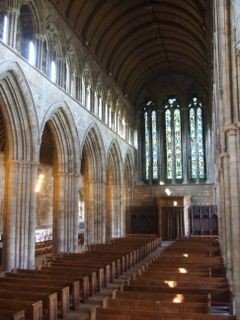 In 1560 the Church of Scotland became reformed or protestant.  The use of the Cathedral was now drastically altered and the congregation needed only the Choir for use as the parish Church.  The roof of the Nave fell in towards the end of the 16th century and the Nave remained roofless for 300 years, during which the congregation worshipped in the Choir.  In 1889 a great restoration of the whole Cathedral was begun under the guidance of Sir Rowand Anderson, a leading Scottish architect, when the Nave was re-roofed and public worship restored in it in 1893.

The pulpit, designed as part of the restoration by Anderson, reflects the history of the Cathedral through its seven carved figures: 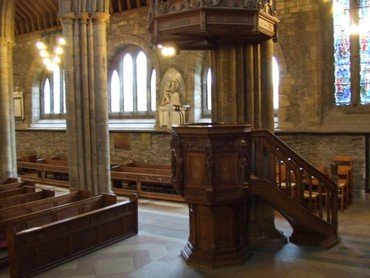 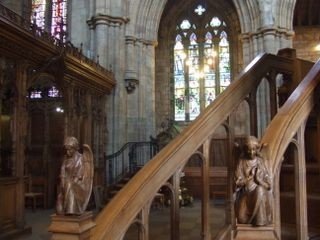 Between the figures are various inlaid symbols of our Lord's passion and crucifixion.  These remind us of the price that was paid to unite the historical diversity (represented in the figures) and only transcended in the words carved on the canopy: "Jesus Christ, the same yesterday, today and for ever." 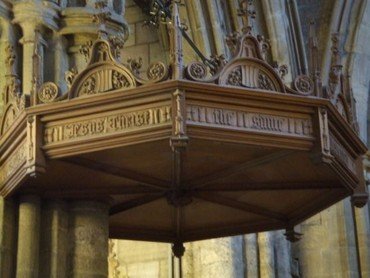 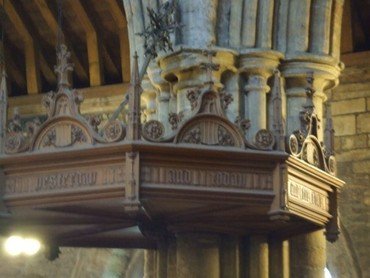 The bosses on the roof of the Nave, showing the coats of arms of its feudal patrons, also reflect the history of the Cathedral.  The series begins on the north side at the eastern end (above the pulpit) with the 1124 arms of the Earl of Strathearn under whom an earlier Cathedral Church was built on this site. There follow, on the north, his six successors down to 1329. The series continues up the south side from the west with six more earls to 1437. Next comes the royal arms of Scotland, for James II became the first royal patron.  From the west end down the centre, the royal arms continue through a succession of kings and queens, through the Union of the Crowns in 1603 (where the coat of arms changes) down to William IV.  The series concludes over the arch between the Choir and Nave with the arms of Queen Victoria, under whom the restoration took place. 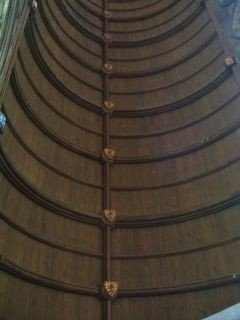 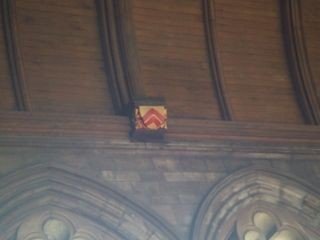 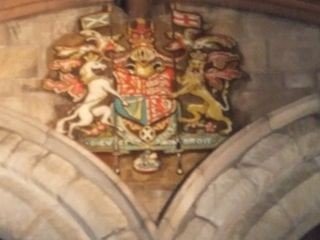 The screen between Choir and Nave, designed by Anderson, was also erected at the time of the restoration.  Prior to the restoration a wall was built at this position, effectively creating a small church in what had been the Choir.  In the original design of the Cathedral  a large screen, probably of timber, would have stood or hung here separating the Choir from the Nave.  While the screening of the people from the clergy and the sacrament plays no part in the theology of the Reformation nor in the architectural thought behind Anderson's restoration, the present screen faithfully recalls something of the Cathedra's original appearance. The four carved figures on the screen on the west are, from south to north: Moses, David, Isaiah, and Jeremiah, reflecting the movement from the Law written on stone to the Law written on the heart. The two figures on the eastern side of the screen show, to the south, John the Baptist and, to the north, St Paul. 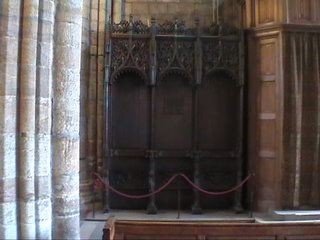 The 15th centry misericord stalls to the north and south of the west door originally stood in the Choir and are among the finest examples of their kind anywhere. The outermost stalls bear the coat of arms of Bishop James Chisholm (consecrated in 1487). The word misericord derives from the Latin for mercy - the extended top of the tip-up seats providing support for those who were tired standing through the long and frequent daily services. 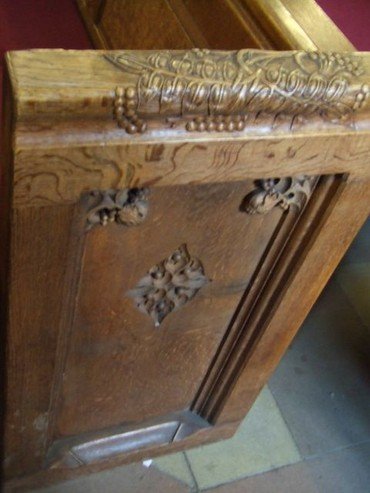 The woodwork in Dunblane Cathedral is one of its glories and includes particularly fine examples of late 19th and early 20th century craftsmanship.  The carvings on the Nave pews (all in Scots oak) were designed by Sir Robert Lorimer, the flowers on the ends of each pew are never repeated, while the front pews are decorated with carved animals, each denoting Christian virtues.

Each of the wrought-iron pendants for the Nave lights made in 1935 is decorated with three flowers, each with a symbolic meaning, and again none is repeated.

The Great West Window of the Nave portrays the tree of Jesse.  It was executed by Clayton and Bell of London in 1906, a gift of Sir Robert Younger (later Lord Blanesburgh) as a tribute to his parents.  The Tree of Jesse, a favourite theme in medieval art, is a reminder of the incarnation, that the Son of God actually became man, the Son of David.  Jesse reclines at the bottom left of the central light at the root of a tree growing upwards through David and Solomon and their descendants to the nativity of Christ, shown at the top. 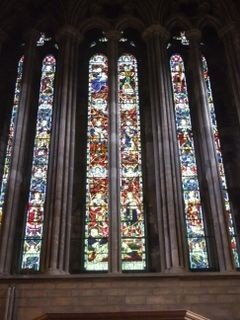 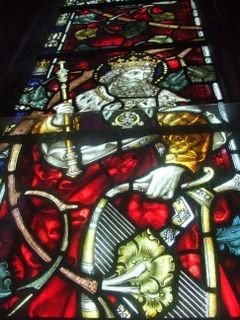 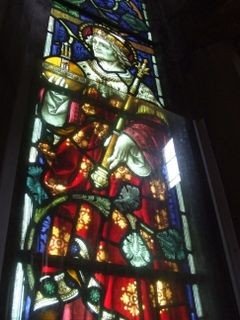