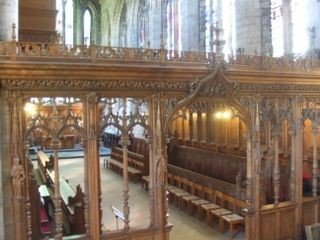 The Choir is 81 feet (24.7m) in length by 28 feet (8.5m) in width within the walls.  It was constructed in the 13th century.  An external parapet was added to the choir about 1500 A.D. by Bishop James Chisholm and is adorned with his crest.  The choir is remarkable for the size of the south and east windows.

A medieval Cathedral's primary function was to be the setting for an unceasing round of daily services said or sung by a team of clergy, called the Chapter.  The laity did not participate in these services which took place in the Choir. 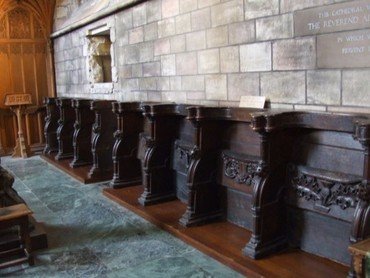 Although the building itself has a large arch connecting the Choir with the Nave, a screen cut off the laity and permitted only the most limited view of the high altar.

On both sides of the chancel are misericord stalls dating from the time of Bishop Ochiltree (1429-1447) showing fine carvings.  The word misericord derives from the Latin for mercy - the extended top of the tip-up seats providing support for those who were tired standing through the long and frequent daily services.

The woodwork of the stalls, the organ case and reredos screen were designed by Sir Robert Lorimer, a prominent Scottish architect, in 1914, a gift of J G Stewart.  The organ case designed by him was cleverly adapted by the organ builder Flentrop when the new organ was built in 1990.   The choir stalls bear a whole menagerie in wood; the profusion of carved animals, said Lorimer, was to represent the richness of creation's variety.  Lorimer's magnificent reredos screen, behind the table designed by Anderson, is in memory of Bishop Leighton.  It represents the seven corporal acts of mercy.  The seven corporal or bodily acts, as distinct from the seven spiritual acts of mercy are based on Matthew 25:35, the centre of the parable of the sheep and the goats.  From south to north they are: visiting the prisoner, receiving the stranger, giving drink to the thirsty, clothing the naked, visiting the sick and feeding the hungry.  The seventh act, burying the dead, shown in the northernmost section, was regarded as a fundamental obligation upon the faithful, as recorded in the apocryphal Book of Tobit. 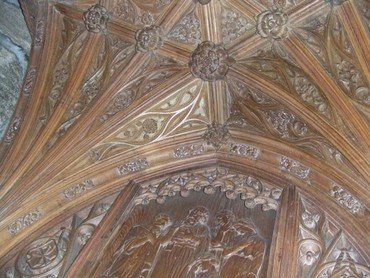 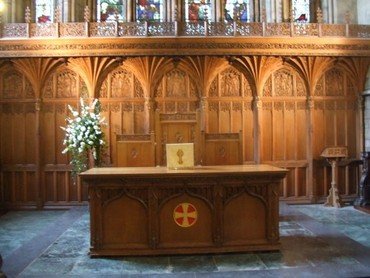 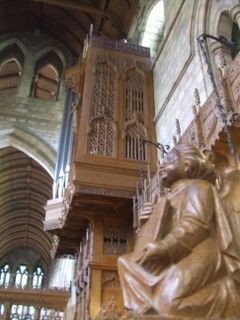 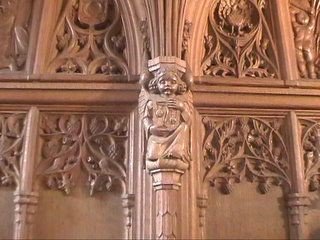 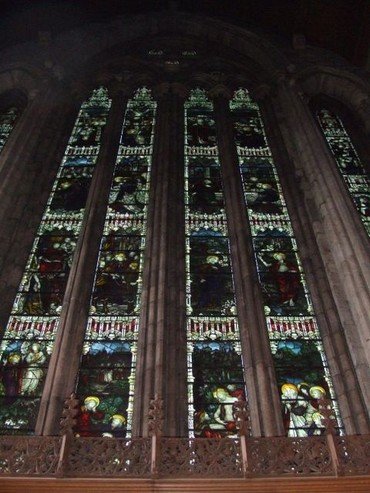 The Great East Window of the Choir was designed by Charles Eamer Kempe of London in 1901 - regarded as one of the finest of Victorian stained glass artists, a gift of Mrs Hay in memory of her husband John Alexander Hay of Cheltenham and his mother.  The four central lights are divided into eight panels, showing, from bottom left, Gethsemane, the trial, Jesus carrying the cross, the crucifixion, the burial, the appearance to Mary of Magdala, the Emmaus meal and the charge to Peter.  Each side light shows four Old Testament prophets, bringing into unity the scriptural testimony to Christ.  On the north side from the top are David, Micah, Isaiah and Jeremiah, while on the south are Jonah, Ezekiel, Hosea and Zechariah. 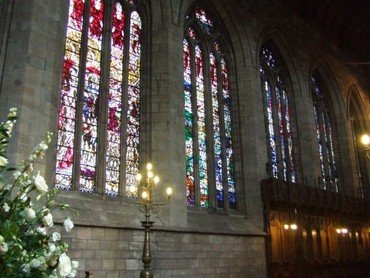 The Great South Windows of the Choir, installed in 1915,  are the work of Louis Davis and are generally regarded as his finest work.  They were presented by Sir Robert Younger, later Lord Blanesburgh, in memory of his mother.  They portray the "Benedicite Omnia Opera" - the song "O all ye works of the Lord, bless ye the Lord" found in the apocryphal Additions to the Book of Daniel, one version of which is Psalm 148.  The structure of the windows is as follows:  at either end smaller windows each show two of the four archangels: Michael, Gabriel, Uriel and Raphael.

From the west, the Allegory Window shows the great features of the heavens:  sun, moon, stars, clouds and the four winds.

Then comes the Chaos Window, showing fire, storms, cold and snow - at the bottom of which

the five members of Scott's ill-fated expedition to the South Pole in 1912 are named.

The Earth Window follows, with its representations of animals, grass and water.  At the top the dove, symbolising the Spirit of God, flies above the waters.   There is a suggestion of salvation in the picture of the ark which carried Noah and his family through the flood.

The Humanity Window completes the series and crowns it, just as man is the crown of creation.  Adam and Eve can be seen at the bottom right, with Jacob and David above, and the three young men who sang the "Benedicite".  To the left, the blessed make their way to the heavenly Jerusalem, and among them are portrayed St Blane, the visionary poet William Blake (who wrote the words of the hymn "Jerusalem"), and Queen Margaret of Scotland who was declared a saint when the Cathedral was being built by Clement, St Louis of France and St Francis of Assisi.

On the south wall of the Choir an inscription commemorates the Rev Dr Alexander Ritchie, whose vision it was which led to the restoration of the Cathedral.  On the north wall a plaque marks the generosity of Mrs Wallace of Glassingal which made the restoration possible.  On the north wall of the Choir is the effigy of a Bishop - in such a prominent position thought to be Clement.  A plaque above the effigy commemorates the visit of Elizabeth, the Queen Mother, in 1983 on the occasion of the Cathedral's 750th anniversary.

Three large brass plaques on the floor of the Choir show the burying places of the three Drummond sisters, Margaret, Euphemia and Sibilla.  Margaret Drummond, said to have been secretly married to Scotland's king, James IV, was the victim of political expediency and was poisoned with her two sisters at Drummond Castle by nobles who wished for the alliance with England which subsequently took place through the King's marriage to Princess Margaret of England in 1503. 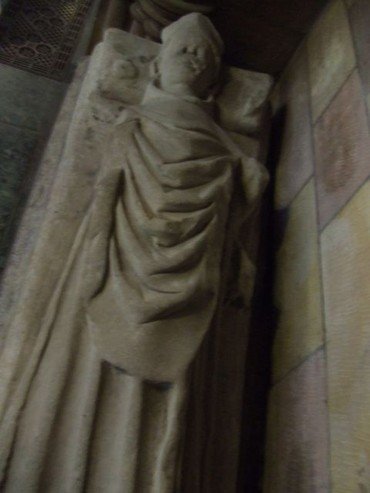 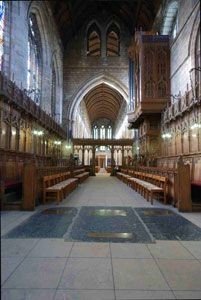 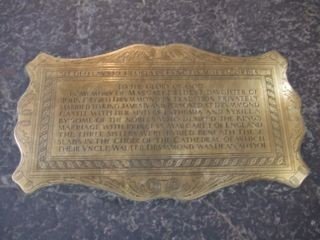