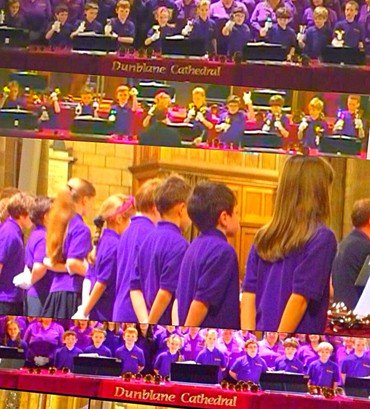 But just what makes using handbells as the musical medium such an effective music teaching tool?  Well, for one thing, handbells make instant music.  Within five minutes of 8-year-olds starting ringing at Dunblane Cathedral they are playing chords to accompany a melody sung or played on a piano.  Handbells require no tuning on the part of a player so they can start to make music right away making this an instrument which is accessible to all.

Children also very much enjoy the fact that they make music in a group – they learn together how to make the instrument play in the correct place at the correct time, they learn with others the values of notes on the printed page, and they work as a team to replicate rhythmic patterns.  The interaction with others adds to the fun – whether it is learning rhythmic syllables, note values, or music notation, all are introduced and reinforced with games.  Being a part of a handbell group fosters community and cooperation.

The teaching techniques used to teach ringing at the Cathedral incorporate aspects of well-respected music methods.  We incorporate aspects of the Kodály1 method, which breaks down musical skills and concepts into steps and introduces them gradually, but also constantly reviews and reinforces them through games, movement, and exercises and the use of rhythmic syllables2 (we use those of Aimé Paris3 – such as taa, ta-té, etc).  The Dalcroze4 method also emphasises that movement is an important tool for the internalization of rhythm, and handbell ringing is very much a kinaesthetic activity – where children learn by listening, watching and actively playing – a note is played with a physical movement of the handbell, and the sound is also stopped by another physical movement of the handbell as it damps against the shoulder.  Ostinato5 patterns, echo, improvisation and other techniques associated with the Orff6 approach are also incorporated.  And these techniques are used in the children’s groups as well as the adult groups, especially when adding to the musical accompaniment of congregational hymn singing in worship.

In addition to two adult ensembles the Cathedral has three children’s groups.  The first of these is for children in primary 4.  The second is for those in primary 5-7.  And the third is for those of high-school age.  The reinforcement of music skills is a part of the progression from the beginning group all the way through all groups.  As well as musical games, exercises and activities, from the outset the children learn to perform music for audiences.  Thus the development of performance skills takes its place alongside working on reading from a music score and adding expression.  The music can range from music created by music educators to demonstrate musical concepts all the way through to energetic arrangements of theme music from Hollywood movies.

Each group rehearses for one hour each week, and each hour’s rehearsal is active throughout with a variety of games and activities to teach or reinforce musical knowledge, as well as working on expression and technique in a previously-learned piece of music, sight-reading new music, honing in on tiny sections of music which involve complex rhythms, or memorising sections to allow performers to focus on the directions of the conductor.

With children’s groups the emphasis is on laying the foundations for being able to read music and perform for an audience.  As all ringers progress, the many and varied techniques of ringing are introduced and developed, as is the ever-increasing musicianship where simply playing the correct note at the correct time is only the start.  Increasingly complex music with a greater part played by each individual ringer marks a progression from beginner to advanced ringer.  Subtle shades, the ebb and flow of music to convey feeling and engagement with an audience are the aims of all of the groups.

The Cathedral groups welcome new players of all abilities from age 8 to adult.  There is a group to suit all skill levels.  The only requirement is a willingness to learn and to work together with others to have fun in striving to make beautiful music.