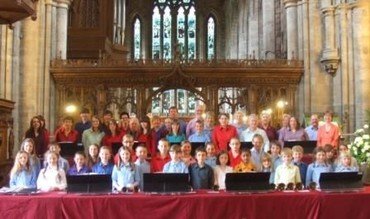 Dunblane Cathedral has handbell groups catering for all ages from 8 to adult. The beginning groups develop music reading skills. The groups for advanced ringers perform widely.

They have been broadcast on television and radio on many occasions, and travelled the length and breadth of the country to perform on numerous occasions in venues both large and small. They have also performed in Europe, Canada and the USA.

They have made commercial recordings and have the distinction of having won the only UK-wide competition open to the thousand groups in Britain in recent times.

A very versatile group they have a wide repertoire spanning classical, modern, sacred and secular music, which has over the years allowed them to present concert programmes on their own, perform with several orchestras, choirs, vocalists and instrumentalists, to take their music to the streets and to contribute to the music of worship in the Cathedral and for many other congregations. They have helped raise many thousands of pounds for numerous charities.

Membership is open to anyone, whether or not a member of the congregation, whether primary school age, high school age or adult.

Rehearsals of all groups take place once a week in school term time.