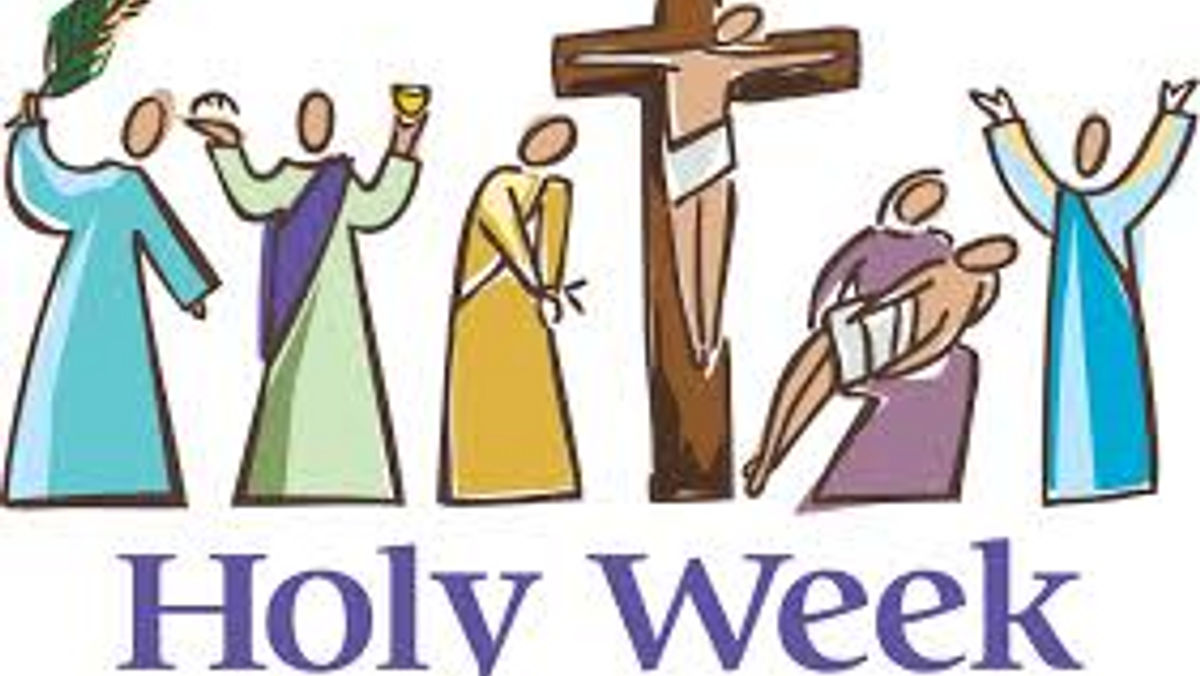 The Easter story (see below) has been split into a few sections to be read on different days throughout Holy Week.

Holy Week begins on Palm Sunday. On this day, Jesus sent two of his disciples to find a young donkey and bring it to him so that he could ride into Jerusalem.

The disciples brought the donkey to Jesus and spread their cloaks over its back for him to sit on. As Jesus approached Jerusalem, crowds gathered, waving palm branches and shouting “Hosanna! The people were very pleased to see him.

The leaders in Jerusalem did not like Jesus. They saw how many people were following him and they were angry about it.

Monday: Jesus at the Temple

Jesus entered the Temple. He was horrified to see that people had set up market stalls and were buying and selling things.

Jesus shouted, “My house shall be a house of prayer, but you have turned it into a den of robbers!”

He was very upset that people were not treating the Temple with the respect that they should.

Judas Iscariot, one of Jesus’ disciples, planned to betray Jesus to the chief priests and teachers of the law.

He went to them and said, “What are you willing to give me if I take you to Jesus?” They were delighted and agreed to give him 30 silver coins.

The Jewish people were soon to be celebrating Passover. Jesus was going to celebrate it with his twelve disciples. He asked them to take him to an upstairs room and there prepare the meal. This was to be The Last Supper

Jesus washed the feet of his disciples, showing them that he was humble and here to help them.

Then Jesus picked up a loaf of bread and blessed it. He broke it into pieces and gave it to the disciples to eat. Jesus said. “This bread is my body. Every time you do this think of me.”

In the same way he took a cup of wine, blessed it and gave it to the disciples to eat. He said” This is my blood. Every time you drink it remember me”

Then Jesus and the twelve disciples went to the Mount of Olives.

It was here that Jesus spoke to Peter. He said, “Before the cock crows today, you will say three times that you don’t know me.”

Peter was very upset, and said, “I would never do that Lord. Even if all the others fall away from you, I never will.”

Jesus went to pray on the Mount of Olives. He asked the disciples to keep watch for him, but they fell asleep.

A crowd of people arrived. Some were soldiers, others were chief priests and teachers of the law.

He walked towards Jesus and said “Rabbi!” which means ‘teacher’, and kissed him on the cheek. This was the sign he had agreed with the chief priests, so that they knew exactly who Jesus was.

As Jesus was led away, his disciples ran into the darkness, all except Peter who followed at a distance. One woman recognised Peter and said. “This man was with Jesus”. “I don’t know him” Peter replied. Later another and then another recognised him but Peter denied knowing Jesus. Just then a cock crowed, and Peter remembered what Jesus had said.

“Before the cock crows today ,you will say three times that you don’t know me”. Peter went away and wept.

Jesus was taken to the Roman Governor Pontius Pilate. Pilate wanted nothing to do with this decision as he knew Jesus had not done anything wrong. He got a bowl of water and washed his hands in front of everyone. “This is nothing to do with me. I wash my hands of all responsibility!”

Jesus was taken away, where the soldiers laughed at him, beat him, stripped him of his clothes and instead, put a scarlet cloak around him and a crown of thorns on his head. , “Look at the King of the Jews!” they laughed.

After a long walk in the hot sun, they reached Golgotha, which is where Jesus was to be crucified. Jesus was crucified on the hill between two other prisoners. The chief priests laughed and jeered at Jesus, saying “Come down from the cross then, if you’re the King of the Jews! Prove to us you can save yourself!”

Later that day, the sky turned black and Jesus cried out to God. Someone nearby soaked a sponge in wine and held it up to Jesus to drink from it.

Soon after, Jesus died.  Jesus’ body was placed in a tomb and a large stone was rolled across the entrance. Jesus’ friends and disciples were very sad.

Easter Sunday:  He is Risen!

On the Sunday morning, Mary Magdalene and another lady also called Mary went to the tomb. When they arrived, they saw that the stone had been rolled away and that the tomb was empty. An angel was there and said to them “Jesus is not here. He is Risen! Go and tell his followers what I have told you”

The women were overjoyed and ran to tell the disciples what had happened.

Later that same night, the disciples were all together when suddenly Jesus was there in the room with them. “Peace be with you” he said. “As God sent me, I am sending you. Tell all the world about God’s love”.